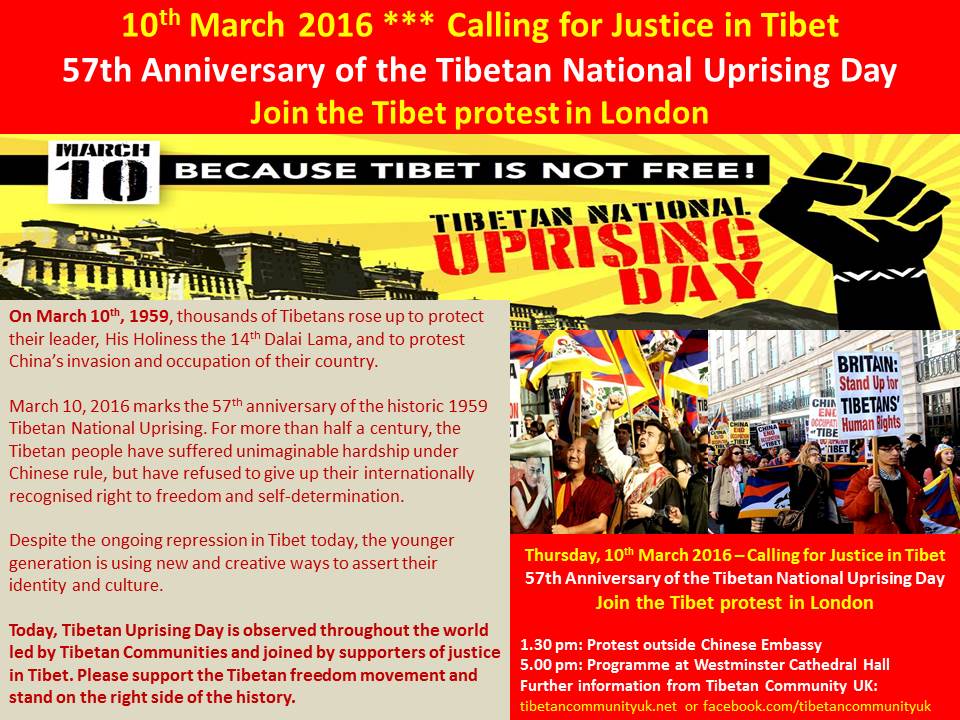 On March 10th, 1959, thousands of Tibetans rose up to protect their leader, His Holiness the 14th Dalai Lama, and to protest China’s invasion and occupation of their country.

As the protests intensified, Chinese troops responded with fatal force. On March 17th, the Dalai Lama began his harrowing escape to India on horseback. In the following days, the Chinese army took full control of Lhasa. Tens of thousands of Tibetans were killed and imprisoned in the months that followed and thousands more fled persecution by making the dangerous journey into exile in India.

March 10, 2016 marks the 57th anniversary of the historic 1959 Tibetan National Uprising. For more than half a century, the Tibetan people have suffered unimaginable hardship under Chinese rule, but have refused to give up their internationally recognised right to freedom and self-determination.

Despite the ongoing repression in Tibet today, the younger generation is using new and creative ways to assert their identity and culture. The spirit of their resistance is alive both in Tibet and in exile, as we see a new wave of young Tibetans taking up the torch of Tibet’s nonviolent freedom struggle.

On Marth 10th, Tibetans around the world stand united, belonging to one nation, with a proud history of resistance. Please support the Tibetan freedom movement and stand on the right side of the history.

Tibetan Uprising Day, observed on March 10, commemorates the 1959 Tibetan uprising against the presence of the People’s Republic of China in Tibet. The failure of the armed rebellion ultimately resulted in a violent crackdown on Tibetan independence movements, and the flight of the Dalai Lama Tenzin Gyatso into exile.

Today, Tibetan Uprising Day is observed throughout the world led by Tibetan Communities and joined by Tibet supporters.

Tsering Passang is passionate about Tibet and the Tibetan issue. He was born in a Tibetan refugee camp in western Nepal. An NGO professional with combined experience of over 20 years, Tsering has led Tibetan Community UK from 2014 to 2016 as its Chairman. Amongst his pioneering initiatives as the Community Leader, Tsering spearheaded "Tibetans Helping Tibetans" initiative and within months, it resulted in securing the sponsorship of 30 Tibetan refugee children for their education in India from 25 UK-based Tibetan families. Prior to his current appointment as the Director of Tibet Foundation, Tsering served as Special Adviser to the Tibet Society. He also worked for Tibet Relief Fund for over eight years, raising vital funds for Tibetan children’s education in India and Nepal. From 2001 to 2007, he worked for Tibet Foundation as Art & Culture Programme Manager. Tsering has conducted multiple field trips to India and Nepal over the past two decades. After returning from his 2008 personal trip to Mustang, Tsering saw a need to provide training to those Tibetan teachers working in rural areas. Within a year, with the support of western teaching professionals, Tsering initiated the vital training programme. Over 50 Tibetan refugees and ethnic Tibetan teachers from Mustang, Manang, Dhorpatan, Pokhara and Kathmandu attended the trainings delivered in Mustang, Kathmandu and Pokhara. He developed partnerships with the local NGOs and schools in Nepal. From 2014 to 2016, Tsering served on the boards of Tibet Society and Tibet House Trust. He was also the Chairman of Tibetan Refugee Charitable Trust. Tsering continues his advocacy work on Tibet. He has attended and engaged with parliamentarians, special advisers and officials from the UK, UN, the US and EU. Tsering has also spoken at important public and closed forums – audience included governments representatives, policymakers, rights advocates, lawyers, journalists, NGO professionals, university students and researchers. In addition to his writings on the Tibetan affairs, published in the British, Nepalese and Tibetan media, Tsering was interviewed by the BBC, Sky News and Reuters. He is also frequently interviewed by the Voice of America, Radio Free Asia and Voice of Tibet. Tsering has conducted special interviews with leading Tibetan political figures - President of the Tibetan Government-in-exile (Central Tibetan Administration based in Dharamsala) and His Holiness the Dalai Lama's former Special Envoy (Washington-based) and former Representative (London-based) for a Tibetan YouTube channel – LondonNey Production. Tsering’s personal blog: www.tsamtruk.com View all posts by Tsering Passang (Tsamtruk)