This morning, my delicious lunch which I brought with me was left behind on a seat of the London Cannon Street bound (Thameslink) train. As I hurriedly got off at London Bridge station around 7.45 am to change for my next train to London St. Pancras station, I forgot to take my lunch box which was put in a white cotton bag. In it you will find some clean rubber hand gloves as well, but no dessert – sorry! The founder may enjoy my delicious lunch! 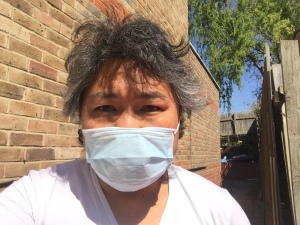 carried away when the train pulled into the London Bridge station.

I enjoy cooking and eating plenty as well! I started cooking at the age of about 12, my mother used to tell me! Last night, I cooked a delicious meal for my wife and I – kids wanted pizza. It was one of my favourite meals – a Chinese style with Tibetan input!

The lunch box contained plain boiled basmati rice, which we bought from the Morrison store. The aubergine was slow fried. Pork chop was cut into smaller pieces and slow fried in olive oil. Oh yes, garlic was fried first until it got brownish. And there are some red chilies sauce. For my last night cooking, I only used soya and hoisin sauces which we bought from a local Vietnamese supermarket.

My name is Tsering Passang and I am a charity worker – currently the Director of Tibet Foundation. Soon this 35 year old Tibetan charity will cease to exist. Previously, I served as the Chairman of the Tibetan Community in Britain. I have nearly 20 years of experience of working in the Tibet world – in the NGO sector primarily.

I see myself as a born Tibetan activist. I was born and brought up in a refugee camp in a remote part of Nepal before I came to the UK 24 years ago. I vividly remember the older generation of our people in the Tibetan refugee camp – telling me that Britain has all the historical documents that proved Tibet was an independent country before China’s invasion of my parents’ homelands. I never forget those words particularly from an elder called – Azin, my neighbhour, who sadly passed away a year ago. He was a tall, a man of few of words who was born in the far eastern part of Tibet in Yunnan province (Jupa). He was absolutely right. The documents are well documented in the British Foreign & Commonwealth Office archives.

I passionately continue to advocate for the rights of the Tibetans as well as other persecuted minorities in China including the Ugyhur Muslims. I love the Chinese people and have many Chinese friends but I also love challenging the Chinese Communist regime openly for causing so many problems not only in Tibet but now around the world.

Whenever I get time, I also try to upload on my social media (facebook & twitter) including my personal blog: www.tsamtruk.com Just recently, I started an online platform to raise the plight of the Tibetans and other minorities in China including the Uyghur Muslims through – Global Alliance for Tibet & Persecuted Minorities (GATPM) – http://www.facebook.com/GATPM2020

One thought on “Tibetan Lunch Box left on the London Cannon Street bound train – the person who picks up may enjoy!”