Padma Choling (Baimachiling in Pinyin in Tibetan or Pema Thinley), Member of The Standing Committee of the National People’s Congress (NPCSC; Chinese: 全国人民代表大会常务委员会) and a Vice Chair of the Ethnic Affairs Committee of NPC members, led a delegation including of at least three other senior Tibetan and two Chinese officials from the Tibet Autonomous Region (TAR) and Beijing to the UK. 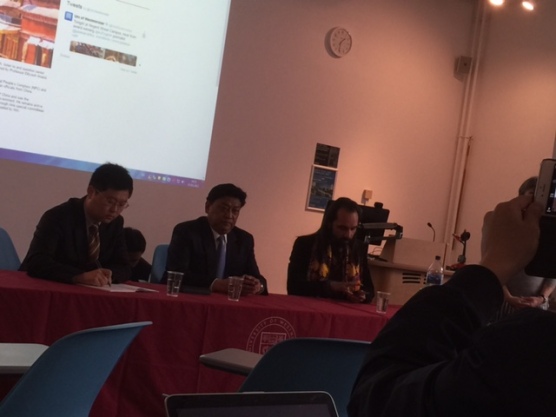 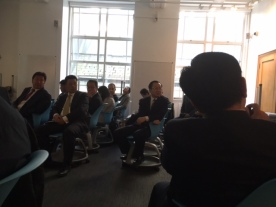 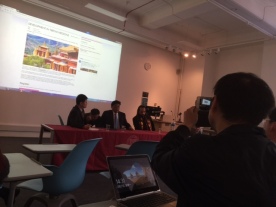 Choling, who spent nearly five decades of his life in Chinese military and politics, was a former Chairman of the Tibet Autonomous Region (from 2010 to 2013). Choling is notoriously known for his rhetoric against the Tibetan spiritual leader Dalai Lama and Dharamsala-based Tibetan Government-in-exile.

He continues to say that there’s no Tibet issue; Dalai Lama must stop Tibetan independence activities; and the Tibetan spiritual leader must recognise Taiwan as a part of China.

Choling began his four-day of UK tour in the morning of Saturday 25th March, when he met with Councillor Sue Murphy, deputy leader of Manchester City Council.

Padma Choling said that China’s people’s congress at different levels stands ready to strengthen communication with their counterparts in Britain and Manchester City and to promote the exchanges between the two countries and its peoples.

Councillor Murphy said that she was happy to see the cultural diversity in China and hopes to visit Tibet.

On Monday 27th, Choling attended an hour-long afternoon session, at the request of the Chinese Embassy in Westminster University, London.

“In this university, and also in other academic institutions in the UK,” Anand said, “I hope that the platforms we provide for different views to discuss their arguments would help to reach agreements.” He further said, “Even if agreements are not reached, at least, we should respect each other’s point of views.”

“In this light,” Anand added, “we are happy to host Padma Choling, a senior Tibetan official from China” to share his perspective on Tibet.

Choling spoke very briefly about his visit goals and introduced his delegation team.

Choling said that during his current visit he hoped to learn how the UK maintains its policies on ethnic relations. He was pointing out that Tibet is one of the 56 minorities in China.

Choling’s presentation included a short video propaganda – Beautiful Tibet – which was about 8 minutes long. He said that the film captures the “development and happy lives of the Tibetan people in Tibet” under Chinese rule.

The propaganda video was extremely impressive with very bright and colourful, even the Tibetan farmers are wearing brand new clothes when they work in the farms.

After the film screening, Anand thanked Choling for his presentation and raised several points before inviting questions from audience.

The audience was mostly filled by the Chinese delegation side including their embassy officials and media team. Less than 20 Westminster University’s staff, students and others including London-based Tibetans attended the afternoon session which lasted about 75 minutes.

Choling was asked why the Chinese Government has not produced any Tibetan Party Secretaries in Tibet even after 50 years of the Chinese rule. He was also asked whether any discrimination against the Tibetan people by the Han Chinese prevails which forbid the ethnic minority to reach to the top level leaderships.

Choling responded by saying “There are many Tibetan Party Secretaries in county and prefectural levels but the current Party Secretary of the Tibet Autonomous Region is half-Tibetan.” He added, “There are no discriminations against the Tibetan people in China.”

Tsering Passang, an exiled-born Tibetan challenged Choling by saying, “I disagree with your response on the discrimination issue.” He added, “As a matter of fact, there are discriminations against the Tibetan people by the Han Chinese in Tibet.” The former top Communist Tibetan official was made aware that the exiled Tibetan respected his response. Passang also said that he understood the official government position that Choling holds.

Choling replied by saying that Tibet has “1700 temples including several mosques in TAR”.

He said that there are 40,000 ‘professional’ monks. “Government has allocated huge funds for the maintenance of spiritually significant Tibetan cultural sites including the Potala Palace and the Jokhang temple.” He said that a number of Tibetan historical sites are listed in the UNESCO World Heritage.

Instead of answering the demolitions and removal of monks and nuns from the Larung Gar Institute in Serta, Choling said that it does not fall within Tibet (meaning the Tibet Autonomous Region). Ironically he also chose to even told-off the exiled Tibetan to be mindful with asking question to the right person next time, indicating the question should be asked to someone who comes from Serta where the Larung Gar is located and not the TAR.

On the ten rounds of dialogues between Beijing and Dharamsala, Choling said that the status of talks should be asked to the Dalai Lama’s former representatives – “Lodi Gyari and Kelsang Gyaltsen” – directly on why this did not move forward. He said that the Central Government conducted ten rounds of talks with the Dalai Lama’s representatives. He added, “The Central Government hasn’t changed its position.”

Choling stated that “Dalai Lama must renounce Tibetan independence; accept Taiwan as part of China; and he must stop splittist activities.”

He further added that “Lobsang Sangay is not qualified to contact with the Chinese Government” as he allegedly “leads an illegal organisation.”

Choling was asked what lessons he has learned on ethnic relations whilst in the UK from its dealings with Scotland and Wales, referring to his own opening remarks on learning from the UK during the tour. He responded by saying that the delegation arrived in London from Manchester and following his further engagements in London, he was leaving the country the next day.

Choling said that he had met with the deputy leader of the Manchester City Council. He also said that he did not get enough time to learn about the ethnic relations this time.

Choling was also asked, instead of being so critical of the Dalai Lama and the Tibetan Government-in-exile, as a Communist Party member for nearly 50 years, what did he really know about the Chinese government.

To which, Choling replied, “I joined the party in 1970”. From birth to present, Choling said that he is “deeply proud to be harmonious with the 56 ethnic groups in China”. He said, “I myself have benefitted a lot from my work, servicing the Tibet Autonomous Region, in the fields of development and reconstruction.”

Choling also said that his “mother is still alive and is in her 90s, who is a believer in Buddhism.” “My mother doesn’t interfere in my belief and I have never interfered in her belief.”

On Self-Immolations, Choling acknowledged that “over 100” have engaged in this action. He said, “These took place in Tibetan inhabited areas outside the Tibet Autonomous Region. There was only one case of self-immolation near the Jokhang Temple in Lhasa. That person was from Gansu Province.” He also raised the question of the role Sikyong Lobsang Sangay in relation to the self-immolations.

On Spiritual belief in Tibet, Choling acknowledged “a good question.” “Many people asked me this question. The majority of the people in Tibet believe in the Buddhist belief to support their life.” He added, “But it is not their pillar of life. I used to tell Tibetans in rural areas. First, you should live a good present life.”

Responding to a student’s question, Choling said that “since the peaceful liberation and the founding of TAR [1965], Tibet is now fully integrated into China.” He added by saying, “When I was in the Office [as TAR Chairman], I used to say, ‘I want Tibet to be the role model’ for the development of ethnic relations in China.’”

Whilst summing up the session, Professor Dibyesh Anand, asked, “If the Dalai Lama comes through this door, would you respect him or … leave the building?”

Choling replied, “I don’t want to see that man, to be honest.”

The moderator repeated his earlier assertions by saying, “In this university and in the UK academic institutions, we very much welcome and encourage frank and open discussions even though we may not agree with each other.”

Anand then asked, “Can we expect the same treatment in China? Can our straight-talking students get visas for China or not?”

Choling replied, “Exchanges are good and communications are important.”

Anand continued, “So … do you want our students to come to China.”

Choling responded by saying, “We will invite you to China at an appropriate time. As you know, there are red tapes in China.”

On Tuesday 28 March, Padma Choling and his delegation met with Crispin Blunt MP, Chair of the Foreign Affairs Select Committee and Richard Graham MP, Chair of the All-Party Parliamentary Group for China.

After the four-day UK trip during which they met with a small number of UK based Tibetans, who were invited to a dinner, courtesy of the Chinese Embassy, Choling and his delegation left for Switzerland on Tuesday, where they were also expected to meet with some Swiss-based Tibetans.

The Chinese Government in recent years has been increasing their outreach with Tibetans living in western countries. Unfortunately, this has directly implicated Tibetans in these western countries engaging less on Tibet’s political struggle as well as other mundane community affairs.

In addition, the dedicated Chinese Embassy officials in these countries maintain regular contacts with some of the Tibetans to undermine Tibetan freedom movement and damage their unity.